The offices of the M'hael, Amyrlin Seat, Master of Arms, Keeper and the MoNSTers
Post Reply
7 posts • Page 1 of 1 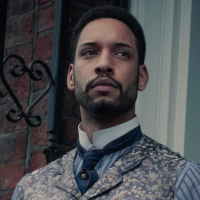 Callum stood before the door to the office of the Master of Novices. Kalyan had done as promised and showed him directly here, with a minimum of detours through various important areas of the Grey Tower that were already on the way here and would help him start to build a mental map of things he would need to know anyway.

Taking a deep, steadying breath, he pulled down on the blue silk vest so that it lay flat against his trim belly. It was more of a nervous tick than anything that was actually needed. His clothing was perfectly tailored and would have lain perfectly on him if he’d slept in them under a hedge. Bringing his hand up he knocked firmly on the heavy door before him, feeling the solidness of the wood beneath his knuckles.
Top

On the other side of the desk, on the other side of the door, stood a stern-faced man with that vague-age appearance that those who channeled and were bound by the Three Oaths eventually attained. He was in front of his window, reading over a handful of missives from various corners of absurdity and wondering just how he allowed himself to be talked into this.

Sure, his grandmother had been the Mistress of Novices (many times) and did well. It suited her, though. She was innately maternal. He, however, was not fatherly. At least not a father most anyone could want.

Derren Jolstraer didn't even look up when the knock came at his door. "Enter," he called, his voice somehow terse and flat at the same time as he continued to read until he heard the door open, then shut, footsteps come, and footsteps stop. Now, the steely-eyed Master of Soldiers lifted his head and regarded the stranger before him. "Who are you?" he asked bluntly.

Callum drew himself up to his full, considerable height, and placed his hands behind his back. He felt like he was interrupting something, and that the man certainly had something far more urgent to be dealing with, but there was nothing he could do about it now.

"Callum al'Thalda, sir. I've come to sign my name in the book and begin my training if you'll have me," he replied, his voice as even and strong as he could make it. He wasn't easily intimidated, most days, but being in such an unfamiliar place, in such unfamiliar circumstances was just a bit unnerving. He could feel his heart thumping in his chest, and the butterflies in his belly were doing somersaults as he stood waiting for the other man to respond in some way.
Top

"Ah," was all Derren said at first. He returned his eyes to the papers, letting the boy (anyone under seventy-five was a "boy" to him at this point) stand for a while. Once he finished, he tossed them on his desk and sat in his chair. He eyes the other for a few moments before gesturing for him to sit in the chair on the other side of the large wooden creation that was the desk of the Master of Soldiers.

Once that occurred, Derren asked, "What brings you to the Grey Tower? Have you already channeled or been tested, or are you just interested to try?"

Callum took a seat in the chair he was directed to, sitting upright, with his hand folded between his legs. "I channeled, albeit by accident, when I realized an out of control horse cart was going to run down a group of small children. Before that I had no idea it was something I could do..."

With that he stopped, brows furrowed a bit while his mind replayed the scenario. "It was probably the most terrifying situation I've ever experienced. But the feeling of power following through me, shaping the air into a solid wall, it was amazing."
Top

A sparing, economical smile ghosted over Derren Asha'man's features. He had never, after all, been an especially effusive man, which was comparably odd to his much more impassioned twin (long since gone, now) and the rest of the family. Even compared to his Aes Sedai grandmother, Miahala, he was emotionally austere. And she'd been compared to statues at times.

The passing smile, however, was because he still could remember his first time and early occasions channeling. And it had indeed been...awe-inspiring, in its ways. Memorable, certainly.

"Did you choose to come to the Grey Tower on your own or were you found by an Asha'man?" he asked next. It would all be written down, but later. He had an excellent memory. It was something that served him well in the Grey Ajah.

Callum noted the smile on the man's face, and that, while it was a spare smile, it did reach his eyes, and he relaxed a little inside. He had had absolutely no idea what to expect upon his arrival, and he was glad it wasn't as brusque as some had warned him it might be when they learned of his destination.

"I came on my own. Until I arrived here I'd never seen an Asha'man except in passing." he replied. He'd seen plenty of them in White Bridge, especially those of the Red who moved through the world, and ensured that those who would use the One Power improperly were taught the error of their ways, though he'd also seen a rare few of the Yellow, on errands of mercy to heal.
Top
Post Reply
7 posts • Page 1 of 1
meble kuchenne na wymiar cennik