When channelers need to channel and don't want to risk breaking the Tower into a million pieces, this is where they go.
Post Reply
4 posts • Page 1 of 1 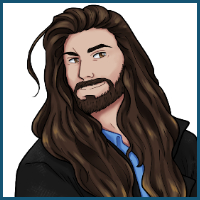 Maever Donovan There were some days when Maever woke up as happy as a clam because he was an Asha'man, and he had proven his worth. It was a wonderful feeling to know that he had reached the pinnacle of his training, and all he could do now was refine his knowledge of the Healing arts and help to teach new Soldiers and Dedicated the craft.

This changed, that day in the gardens only a few days before.

"We think you have made excellent progress as an Asha'man of the Yellow Ajah."

"Oh, I do be very sorry," was the automatic response.

The Illianer sat on the bench in a state of pleasantly numb surprise, even now. It hadn't really sunk in, and he had never been the best at hiding how he felt. Maever Donovan, First Weaver? He had never imagined it, and now he was rather puzzled at the development, but not necessarily unhappy about it. It was very flattering that he was considered capable, and it would have been rather rude of him to say no.

It wasn't going to be a secret for very long. The identities of Ajah heads were specific to their Ajah and Maever, for all that he was a quiet fellow, wasn't the sort of person to intentionally keep things from others. That was just a little rude. Besides, he was Oathsworn, so if someone asked him he could hardly say no could he? That would be awkward. No, Maever supposed he didn't mind if people knew, though he did feel rather lofty with the title. First Weaver. It carried all these connotations with it of competence, leadership and skill, when really Maever just wanted to carry on as he was, helping others and directing resources to where they were needed most. He could do this as First Weaver, though from what he understood he would have to attend more meetings and tell people what to do. It do all be part of something greater.

He sat and noticed the trainees in the yards, throwing their rocks around and setting things on fire. It was all rather barbaric in Maever's eyes and he felt a little less bad about feeling that way now, as if he had to be a Yellow to validate his opinions in some way. The Illianer recalled his own days of training and how much he had endured rather than enjoyed anything outside of the Infirmary. Now, he liked to just sit in the yards and observe, then if anyone was in need he could go over and help them. It was a good idea to have a Yellow on hand just in case actually, come to think of it... maybe this was something he could bring up at his VERY FIRST MEETING which he was totally not at all nervous about.

He didn't keep that nervousness away entirely. Maever carried it about like his dragon pin, but at the same time he felt pretty good and he was going to enjoy the sunlight on his face, the soft wind rustling his hair, and the steady sounds of trainees hitting one another.

Abby's usually small, shy voice was a little brighter than usual, and a small smile spread across her face as she showed Torianin her paper. Her daughter's smile drew one out of the Aes Sedai as well as she took the essay. Abby was all of twelve years old, but her work was very advanced. Torianin skimmed the dissertation, and noted that there were sparse marks. The fact that a sister took the time to read her work seemed to give Abby a burst of confidence, if a little small. "That's wonderful, Abby!" she said happily.

"She...she asked me if I wanted to be tested to see if I could be taught to channel..."

Torianin watched as her daughter froze and turned in on herself. "Abby, it is all right. You are old enough to be tested, yes, but I will be the one to test you...when you feel you are ready." Having been forced traumatically to be tested herself, Torianin wanted something better for her daughter. Abby nodded, and the Red Aes Sedai comforted her before leaving their quarters. As she left the rooms, Abby was working on her corrections, that confidence back up. Her daughter was getting better, just slowly, which was fine.

Today, she was heading to the Channeling Yards. She had begun to teach an Accepted a few battleweaves that she knew...but just a few. The girl seemed determined to be a Green, and wanted training as soon as she had been raised. It took her two months to seek out Torianin. She knew Lizza to come to the Channeling Yards, now free of the burden of rules that said she could not channel without the aide of someone higher than her in rank. As she crossed the grounds to the Channeling Yards, Lizza perked up and stopped the water spout and nearly sprayed all the others practicing with her. She was at least smart enough to catch her mistake. Finishing the weave through, she turned to her teacher, a smile on her face.

"Yes, the one you nearly shared with everyone else."

Lizza's face reddened and turned back to practicing.

As her student began working again, channeling the appropriate amount of Water, Torianin began to relax. Her gaze wandered as her attentions kept on the Saidar she was feeling from Lizza. She noticed an Asha'man with an Oathsworn pin watching the trainees as well. Good they were both there, so all of them had someone to keep them accountable. "Good day, Brother," she said with a smile, walking over to him. "I don't think we've been formally introduced. I am Torianin." She scanned the trainees again. "Do you have a student out here as well?"

It was ever so relaxing, even with the aggression and frustration that came with training taking place not so far away from Maever. Detached from it all now, he could simply enjoy himself and his new position at the Tower. Of course, he did keep an eye out and make sure that nothing went wrong with any of the trainees, but he could do that without it interfering with his current state of zen.

He was aware of the Aes Sedai who went to speak with one of the students using some water weaves, but it was none of Maever’s business so he didn’t think anything of it. She’d been doing something with a water spout that he supposed was, well, it would be good on a warm day perhaps…

Then the Aes Sedai was making her way over to him and the Illianer realised that he had no idea who she was. She had red hair, which was very lovely, and when she introduced herself he recognised her accent was unusual (not that he had room to talk, apparently), but that was pretty much it. Maever only really knew people who made a habit of visiting the Infirmary, which was probably a failing on his part. But Torianin seemed nice enough, and at her introduction he stood from his seat and gave her a bow of his head.

“Fortune favour you Torianin,” he said politely, “I do be Maever, and it do be a great pleasure to be meeting you!” Plus, it was always useful to have an Aes Sedai around to make sure that those female trainees weren’t doing something… Saidary. Maever, feeling rather lanky in front of the woman, took his seat once more with his hands pressed together on his lap.

“Oh, I do no be having a student here, I do be sorry,” he said apologetically. “I do mean, ummm, I do just be here to keep an eye on things! The Infirmary do be rather quiet today and sometimes I do like to get some fresh air, so, well, here I do be in case anything does go wrong! It will no, fortune prick me, but one can no be too careful.” Maever nodded to the Accepted who was doing something… Watery… still. She wasn’t the only one, there were other girls practicing around her, but since Torianin appeared they had been a little more focussed in their practicing than they were before. It wasn’t a change Maever often saw in his own students. “The Accepted, do she be one of your students? They do all be working so hard!”

As Maever spoke, a small group of Dedicated were training with weaves of Earth, ripping the ground apart to throw at one another. A conspiratorial look crossed the eye of one of the group, and a few quiet words to his comrades and they were eyeing the nearby Accepted. Maever was sure that they were going to ask to train with them, so he thought nothing of it. “It do be lovely to see trainees working together!” he declared, oblivious to any tricks they might have up their sleeves.

Torianin smiled and sat next to the Asha'man after he introduced himself. She had considered joining the Yellows early on. An Accepted who had joined their number had evaluated her channeling abilities, then taught her how to perform the Healing weave. An Ajah that concentrating on healing, so that people could move forward was intriguing to her, but...she heard another calling in the Red Ajah. Maever's accent was a bit hard to decipher at first, but as he spoke, it became easier to understand him. Most Illianers that she had encountered at the Grey Tower had a weaker accent. Torianin's own dialect hadn't faded since she came here, even though she thought of her old home very seldom nowadays. But, in a place as diverse as the Grey Tower, it was a way to distinguish herself.

"It is a pleasure to meet you as well, Maever," she said. "That is a good idea, keeping watch. While Accepted and Dedicated can channel without aid, there are always those like my Lizza who jump at the chance to impress everyone without much thought." She made sure to keep her voice to wear the Accepted couldn't hear. "Barely a month wearing the Great Serpent ring, and she's ready to take on the Shadow. And, yes. She is my student. I had mentioned being damane before coming here, then during the Seanchan attack, she saw them in action. Perhaps that's now what she should have taken from it, but...it is better than retreating into fear."

Torianin watched her student for a moment. Lizza was getting better at the weave. The spout of water came up from the barrel faster every time she tried it. Maever mentioned that it was good to see the trainees working together as well. "You are right. I just worry that she may get distracted. I will watch her, though." Accepted and Dedicated alike crowded around the young woman, and she excitedly told them about the Water spout weave. The Accepted seemed to take to the technique easily, walking away to try it out. The Dedicated stood, scratching their chins on the matter. They dispersed, but they still had a gleam in their eye that Torianin did not like.

Return to “The Channeling Yards”